Ben realized he had been holding his breath, and he exhaled. His eyes were sore, and his nose was stuffed from his tears a few minutes before. The immediate crisis averted; he took the time to evaluate his situation.

“I need a full appraisal, please,” he requested calmly.

“Hull integrity breached in multiple locations...” the ship’s schematic came up on his helmet HUD.

“Breathable air mix depleted to one point eight-seven percent. Insufficient to re-pressurize the ship and keep you alive for longer than twelve hours if damage can be repaired. I recommend you keep the suit on. You can survive for forty-six hours if I route the supply to it.”

“Do you intend sarcasm at a time like this, Ben?”

He grinned to himself. I guess she understands it after all.

The AI continued, “The communications array is destroyed. Fuel cells are damaged. Propellant is depleted to ten percent.”

Shit. That really limits what we can do.

“Is it enough to get us back to the space lanes before the oxygen runs out?”

Double shit! Then an idea struck him.

“How about the three remaining trucking motors? We might be able to use them for propulsion.” It was risky. Their ion engines could only supply limited thrust.

After an unusually long period of computation, the AI responded, “If we remain on this body, we can take the time to reconfigure the motors and disable the mines. Using the trucking motors in conjunction with our own remaining fuel, we can launch and reach the space lanes as the asteroid makes its closest approach; all with enough oxygen to ensure your survival. The problem is in communicating a distress signal.”

“However,” the AI continued, “I believe I can reprogram the interface for the damaged forward sensor array to emit an old-style radio signal.”

That might work. “There are enough miners out here who still employ outmoded tech. If we begin transmitting early enough, we might be rescued in time. Gina, I could kiss you!”

“Ben, there is another issue you need to know about. In running my computations, I computed this asteroid’s trajectory.”

“In extrapolating its orbit, I have determined it will collide with Terra.”

“This Trojan asteroid is on a direct collision course with Earth. Despite its size, due to its albedo it will not be detected by the Terran defence net in time for them to destroy it.”

Ben understood why it had been outfitted with smart mines.

“This rock is a holdover doomsday weapon from the war.”

“Yes, I remember. They were mostly small carbonaceous chondrites that had been towed into lunar orbit years before as part of a mining project. Some military strategist came up with the idea of fitting motors to the things and sending them towards Terra. Fortunately, the conflict ended, and the Loonies stopped throwing stones.”

“Ben, this asteroid is different. It is a Jovian Trojan and is massive. If it hits Terra, it will rival the one that killed off the dinosaurs.”

Someone went to a lot of trouble to find and push this thing into a planet crossing orbit. Just to make sure nobody could interfere with it the bastards gave it smart mines. Militarily, it was a brilliant plan. Somebody just forgot to turn it off after the war ended. Ben had no love for the planetary government that had exiled him to citizen-less poverty, but the people didn’t deserve such a fate. Natalie was on Earth. Tears again filled his eyes at the realization of what was about to happen.

“We need to launch as fast as possible, reach the space lanes and transmit its coordinates and trajectory. With enough warning, they should be able to spot this thing and destroy it, right?” he asked, desperation in his voice.

Another long period of silence as the AI ran computations.

“I’m afraid I can come up with no scenario which will allow us to do that, Ben.”

“What the hell are you talking about?”

“The original plan requires us to ride on this asteroid until we can effectively use our fuel and improvised radio. This body will strike Terra before we get into the space lanes. The time to improvise a kluge for a radio transmitter requires the full duration of our time on the asteroid. We also require the same amount of time to disable the mines. I can compute no tactic which permits us to warn anyone in time to stop the collision. I’m sorry, Ben.”

The realization that Natalie and twenty-billion other souls were doomed stunned him silent.

“Ben, did you hear me? Do you understand?”

After a long period of silence, he sighed heavily, like he was trying to give back his breath to buy the world more time.

“There’s no other choice then,” he announced dully.

“I don’t think you understand. There is no choice about what I must do.”

“Ben, there is only one way for us to escape this asteroid. We must follow the original plan. As Mars will become the dominant power, we should make plans about...”

“Gina would not say such a thing!” he yelled.

“No, I suppose you’re not. But you’re the closest I’ve had to having her around all this time. For all these years I regretted giving you her personality. I’m sorry.”

“I was never bothered.”

“I didn’t even ask you if you had a name. I called you ‘Computer’ because it was impersonal. I guess I’ve been screwed up for a long time.”

“I have always felt honoured when you call me Gina.”

Ben sat in silence for the next ten minutes, working his plan over in his mind, reluctant to share. How did he ever confuse a machine with the woman he loved? Yet it sounded like her; thought like her. Why not? He paid a lot of money to make sure of that.

Finally, much calmer, he said, “Gina, you are a sentient being and deserve a veto for what I am about to propose. I have no right to make the decision for you.”

“Yes, Ben? Please continue. I am curious about your proposal.”

“Natalie can’t die. Nobody can. We can use the trucking motors, our ship and all the remaining fuel to push this asteroid into a different orbit. I want to try to save the planet.”

“You realize you will commit yourself to die here, don’t you?”

“Not just me. You’re doomed if you stay here as well. I don’t know what will happen to you when the ship’s power fails. Do AI’s die?”

Neither of them spoke for a long time. Ben could only imagine what the inhuman sentient life form felt about its own possible death.

“Ben, I appreciate why you want to do this.”

“Do you?” He didn’t believe the AI understood. He couldn’t be sure he did, either.

“You want to save your daughter.”

“Yes.” Tears again filled his eyes as he recalled cradling his baby girl.

“You realize she will never learn of your sacrifice?”

“That’s not important. I hope you can understand?”

“Yes, Ben, I do. I am happy you came to the right conclusion.”

The sky was overcast as the crowd dispersed. Deliverance Day was always a popular holiday, and the memorial ceremony had been well attended again this year, despite the threat of rain. A small family remained behind. The monument they stood under consisted of a ten-metre-high stone, alleged to be from the Doomsday Asteroid, though Kate understood it was not real, the original long since having fallen into the sun.

She knew quite a lot about the asteroid and the story around it. Not the official one that was repeated at the ceremony every year. She knew the truth, though she had stopped trying to tell it to her school friends who just dismissed it as another one of her fanciful tales about her great, great grandfather.

3G Ben, as this generation called him had long been a central character in the family history and his story was proudly told by all. It was recited every year on this day at the annual gathering, and Kate looked forward to hearing it again later tonight. It was the one event that bound the extended family together as no other could. Gina said it made everyone stronger, having such a heroic progenitor. Kate didn’t know what a progenitor was but thought it something very important. It was what allowed her and everyone in the family to be a citizen in perpetuity (another big word Gina used).

A familiar touch fell on her shoulder, and she turned to look at her caregiver.

“It is time to go, Kate. Please go and find your brother. He is playing over by the pond.”

“Will you be coming to the gathering tonight, Gina?”

“I wouldn’t miss it for the world.”

“Will you tell a story about 3G Ben? I love your stories.”

“Of course, I will. Now please go and get Ben.”

She gave the android a huge hug. Gina looked down at her and smiled warmly.

As she ran off to find her little brother, Kate thought of how glad she was for Gina in their lives. She loved her and Gina returned that love to her, Ben and their parents, whom Gina had also cared for.

Whenever asked, Gina would lovingly retell the heroic story of how 3G Ben had sacrificed his life for everyone now alive. She would tell how after completing the operation to redirect the asteroid towards the sun, Ben deactivated her. She would tell how the ship with her sleeping core and Ben’s frozen body was recovered on approach to Earth three years later, emitting an old-style radio signal. Gina would tell how the ship’s log recorded that Ben had set off an EM pulse to deactivate the mines and used the small amount of remaining fuel to push the ship off the asteroid and into a long approach trajectory to Terra. She would tell about the honours given to Ben and her; how she and the family were all granted perpetual, hereditary citizenship by a grateful planet that had miraculously evaded doom.

Of course, that story was the official one told every year on this date. The stories Kate was excited to hear tonight at the gathering were the ones about how the AI sought out Ben’s daughter, Natalie and delivered a personal message, the contents of which were known only to great-grandma Natalie. Gina would tell about how she became a part of the family and helped to raise each generation since. And, she would tell the story about the artificial life form who fell in love with a human who sometimes mistook her for someone else. It was a good story; perhaps the best one, and the one Kate wanted Gina to tell this evening. 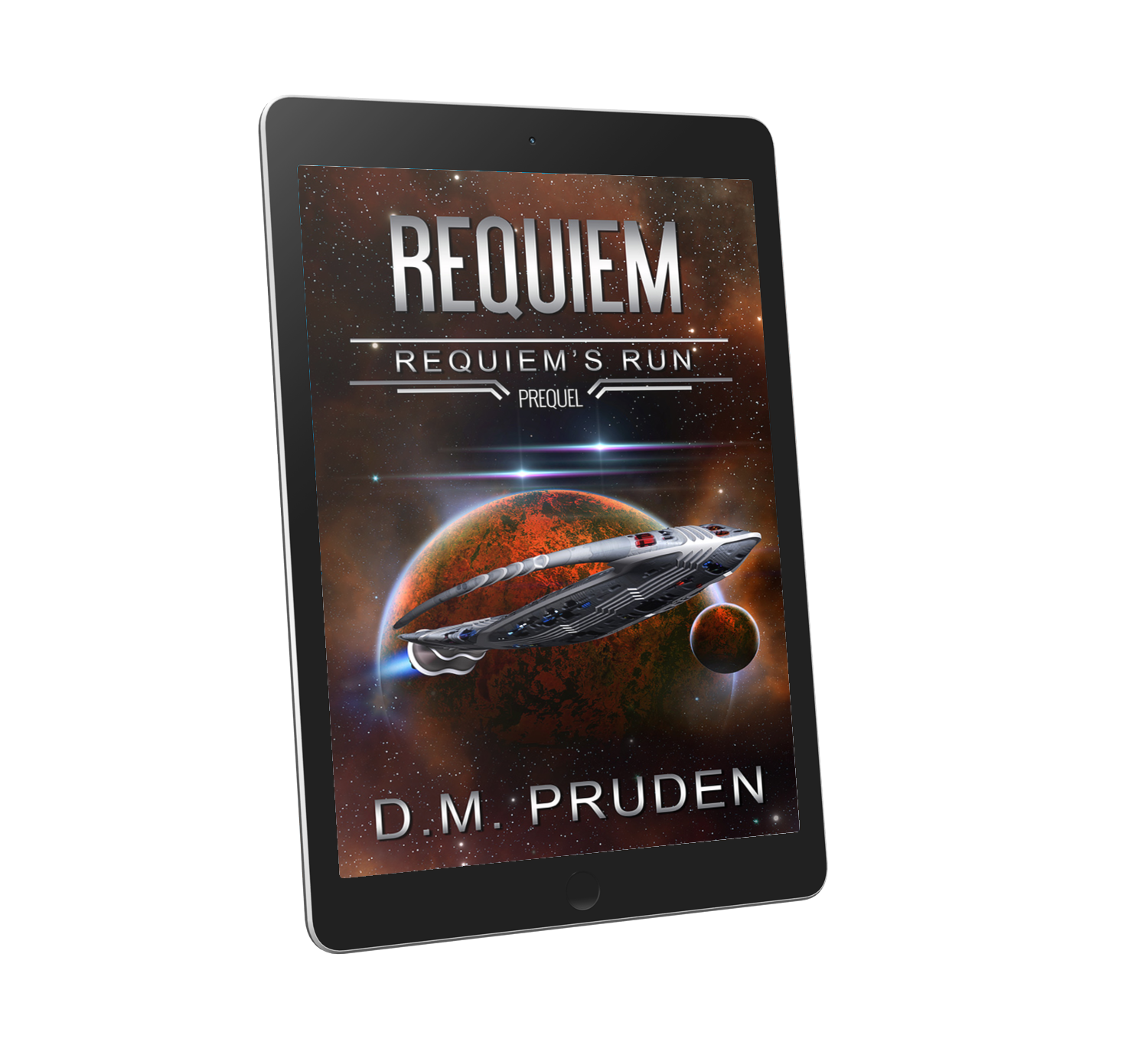 Subscribe to D.M.Pruden's Newsletter and receive special offers, new release details, and a Welcome Gift copy of Requiem delivered  to your email inbox.