Imagination is a Muscle 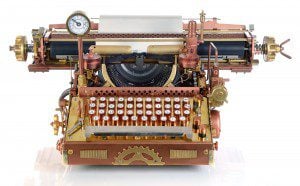 Imagination is a muscle that needs exercise if you want to develop it.  Many people believe themselves to have a good imagination;  I used to be one of them.

In Childhood, Our Imaginations Reign Supreme

As children, we naturally run and play, both physically and imaginatively.  My 3 year old granddaughter reminds me of this constantly.  She is forever playing make believe games, by herself or with whatever adult she can convince to join with her.  In her mind, reality and fantasy are all one beautiful spectrum and she freely bounces from point to point along the continuum.

I remember being like that, not just as a preschooler, but also as I grew.  I was constantly inventing fantastic scenarios in my mind when I should have  been paying attention in church or class.  My fantasy worlds were rich and detailed and a joy to spend my idle hours in.  In my time, back in the late Cretaceous period, we had only two television channels in my town, and most of the good programs that I watched (Thunderbirds, Fireball XL5, Stingray…mostly Gerry Anderson stuff, now that I recall) fuelled my imaginative worlds while I rode through the neighbourhood on my bicycle until it was time go inside.

I didn’t just re-live old TV episodes.  I invented entirely new adventures, often based on the shows.  I also created my own worlds, inspired by my meagre TV watching.

Growing Up Kills the Imagination

Then I went to university and got a degree in Geophysics.  I still thought I had an active imagination, but it mostly came out in my wit and humour and I noticed that my fantastic scenarios were replaced by dreams of marriage and family and career.

I was fortunate.  Working in the oil industry as an exploration geophysicist, I was required to use my imagination to conceive and develop oil and gas prospects.  So, while I was using my imagination on an almost daily basis, instead of be fantastic and free wheeling, it was now constrained to scientific principles and “reality”.

I consider myself fortunate.  I could have been an accountant or petroleum engineer.  Those poor buggers had no opportunity for creativity in their day to day work, and heaven help the ones who went into middle and senior management! (If you doubt this, take a good close look at the executive suite in any major corporation and tell me if you see any imagination at all!  Most of them are lemmings that won’t make a move unless it is something already done by someone else.  But I digress…)

Discovering that the imagination needs bulking up

With the recent oil price drop, when demand for my technical abilities dried up, I decided to resurrect my fiction writing.  What I discovered was, to say the least, shocking.  I found it difficult to get my imagination to flow freely with the kind and quality of fantastic ideas that occupied my mind in my youth.  I had ideas for stories, sure, but they were heavily constrained by “reality”.

The truth, I realized, was that I had been neglecting my imagination for many years and it was now a weak remnant of what I remembered.  In the months since I have been writing, I have found that, by practise, the ideas are flowing more freely now.  They are still constrained, but not so much as before, and I have every hope that I can enjoy a level of creativity that I once enjoyed and took for granted.

I have nothing but envy for the authors who never allowed the “real” world to interfere with their imagination muscle.  I read works by many and feel totally inadequate to the task of writing to such a calibre of imaginative fancy.  I know I will improve and get closer to my goals, but I do so admire those whose work I fear I will not be able to approach.

Still, what they write comes from their experiences and is an expression of themselves.  My work is a sum of my experiences and, as a result, is unique to me.  My work will never, nor should it be, the same as that of others.  Then it would be only derivative.  I want to be imaginatively original and will continue to exercise the muscle that is the engine for that.

I think I will go and hang out with my granddaughter, now.  I need another lesson in imagining.

How about you, dear reader?  What is your experience with imagining new worlds and scenarios?  Do you think the new generation of video games and movies helps or restrains imaginative creativity?  I would love to hear your comments.